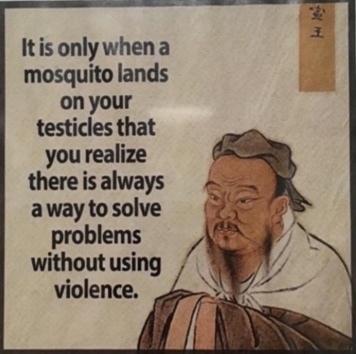 An earlier comment about violence caused me to think more about the violence I have actually seen for myself during my lifetime, rather than having read about or seeing videos, or heard from others. Well,  to me the world is not a violent place if I based this on what I have personally seen. I have never seen blood spilled ( except for a cut), either through attack or accident. Unlike a police officer or an emergency room nurse or doctor, or combat soldier,  I have not only not been exposed to the effects of violence, I have not actually seen anyone shot or injured. I have not even seen a grisly automobile accident.

The above is actually pretty remarkable. Reading history, and the news one sees violence all the time.  There is lots of violence in movies, TV, books and games.

But when I think about it, 150 years ago, most people were on farms and small towns.  Being that there was little news of the wider world, their reality was that things were peaceful, unless they were in a war zone or high crime culture. So the speed of information from afar has created the impression that the world is full of violence when, as a percentage of the time, it is not.  There could be a 6 million people exposed to violent acts a year in the US, either through being a victim or perpetrator and that would mean that 98% of the population was not personally exposed to violence. An interesting statistic is that the incidence of fatal and non fatal gun violence in the United States has dropped by 40% in the last 20 years. Who would know that by reading and listening to the news.

So one of the ways that I have lived a blessed life, is that I have not been exposed to or suffered from violence.

So, to what degree have you been personally exposed to violence?

This site uses Akismet to reduce spam. Learn how your comment data is processed.